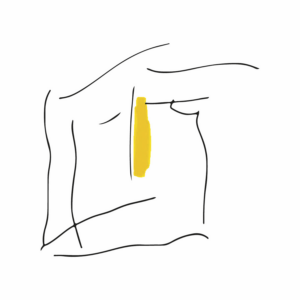 As a boy, I often lay with the lights on and the duvet pulled up over my head.
I was terrified of being attacked by the monster that lived inside the old Bornholmer clock that stood out in the hallway.

To keep the monster at bay, I made music inside my head.
I don’t know why, but it was classical music I was making inside my head. Often large orchestral works, with the groups of instruments organized as luminous blocks floating in an imaginary sky.

I come from a home with a piano, bongo drums, 5-string guitar – and gramophone. All kinds of music was played, but apparently the classical music was the best to keep the monster inside the Bornholm watch.
As I remember it, the music felt clean and powerful and original.

Around 2012, after many years of defining myself as a rhythmic musician and songwriter, I suddenly managed to compose a sounddesign for an exhibition that sounded like nothing else. I had my own direction towards electronic music, but here something happened that, more than anything else I had done, pointed back to the music of my childhood.

In 2010 I started composing music and sound for cultural history museums and in collaboration with Ole Birch Nielsen I had developed a technique where I combined all the sounds in a given exhibition. As you would make an orchestral work. And now it fell into place. The sound side was for the exhibition Siamese Collection and it can be experienced again from spring 2023 in Ebeltoft, Denmark.

The music in my head was turning into real music. – at least composed sound.

I got several assignments to make sound for exhibitions – often there was room to both compose sound design and make regular music.
Some of the music was rooted in time, but some of it, I thought, had the character of being able to stand on its own, without the direct reference.

Something had awakened and I started writing independent works, now with a direct focus on classical instruments and ensembles.
This was not least encouraged by the support of my girlfriend Anette, my meditation teacher Jørgen Høher, my mother Annelise Bendixen and her now sadly deceased boyfriend Svend Nygaard.

Through my mother, I came into contact with Morten Lønborg Friis, who became my classical teacher.

In 2018, Ulla Lundsgart commissioned a work – for her tulips!
I chose perhaps the most difficult setting for my work: a string quartet.

After two years of work, they managed to put an end to it. At the same time, I had selected a number of works from various exhibitions and it was now possible to put together a concert programme.
however, I had no idea how to get it played – I knew virtually no classical musicians.
but a few months before the concert was to take place, I got in touch with Anna Jalving.
It was my luck – she is both an immensely talented and curious musician, a great organizer with a network of the other world.
Suddenly I had a professional string quartet.
At the same time, I pulled myself together and asked Niels Ulbrandt if he would be my pianist.

Two sold-out concerts were held on 20 September 2020 at “The Garden Studio”.

More music was added, both independent music and new exhibition music.
And Anna gave me the contact for Aulos Duo.

I received support from KODA, and fortunately I knew Henrik Winter Hansen from his work as an acoustician.

It is very special when one’s dreams come true.
After all, dreams are a form of imagination, perhaps even astral images of what can save one’s life – make monsters disappear, for example.

It’s not for me to judge whether I should be doing something other than writing music, but I find that when I hit my compositional nerve, the references, role models and notions and monsters disappear.

And what is left is

i got in contact with Fabian Russ becuase he visited Moesgaard Museum and experienced the The Exhibition RUS Viking.

“I liked it very much!

We started a hopefully never ending sms thread. He suggested that he could do a remake/rework of one of my tracks.

I´ve been listening to a lot of his music, reading about his work and I really like his approach and the results.

Fabian is from Germany and has done so many different things that I will refer to his own description of his career.
His remake is our first collaboration and it is both our wish and hope to be able to work together in the future. 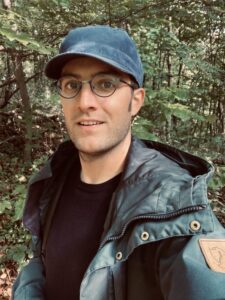 The piece was written for an exhibition at Danish Jewish Museum, Copenhagen and afterwards I did some small changes in the arrangement.

Neus debuted in 2021 as a soloist from the Jutland Music Conservatory and María made her debut as a soloist in September 2022. They have played together for many years and almost function as an extension of each other. The piece is a dialogue where the voices weave into each other – take over from each other, collide, speak out of sync, but finally meet in respect and in harmony.

Henrik winther, recorded, produced and translated my not so well developed classical language and I am very satisfied with the result. 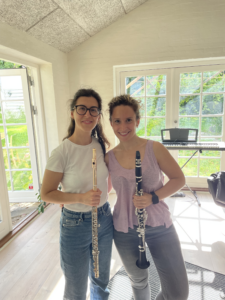 On a dark and stormy evening in April 2020, it was finally time to record the piano pieces. At Henrik’s instigation, I had been allowed to borrow Sct. Lucas Church in Aarhus – it is the room with the best acoustics in town and they also have a Bösendorfer grand piano.

The church was built in 1921 – 1926 and built in a neoclassical style, a style that is based on writings and finds from the excavations in Herculaneum and Pompeii. I didn’t know that at the time in April, but that might be the explanation for the fact that I felt we had ended up in the right place. 3 of the works we recorded were originally written for the exhibition Pompeii & Herculaneum at Moesgaard Museum…

Niels was, as always, well prepared and played deeply concentrated. A great vote of confidence. 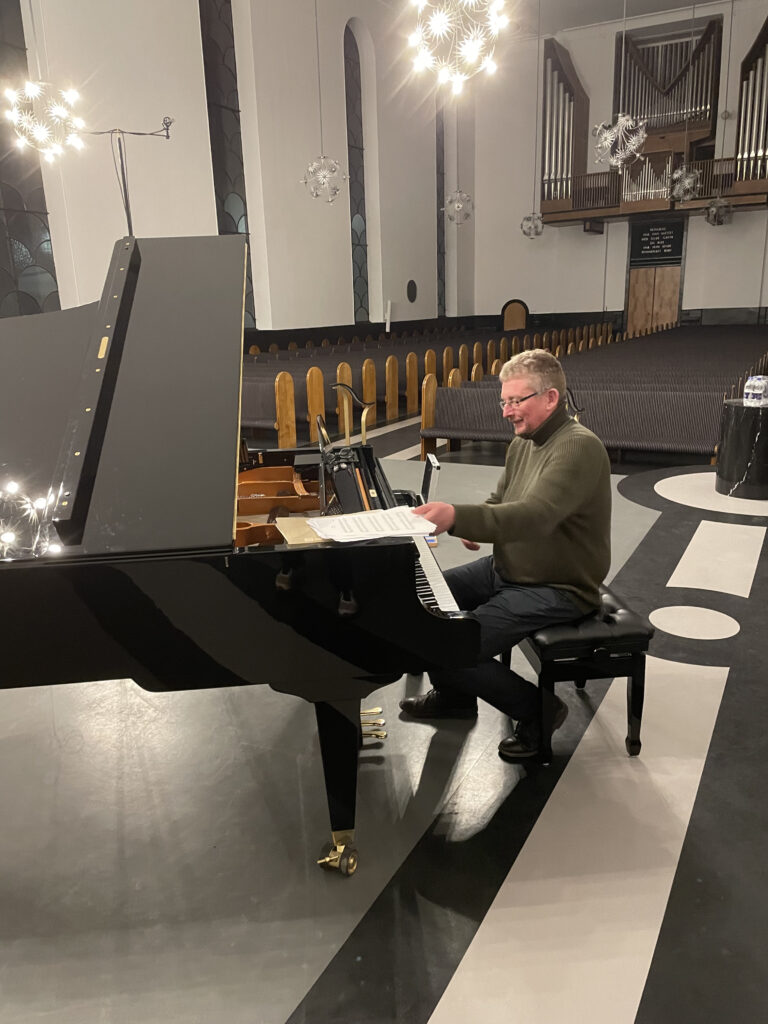 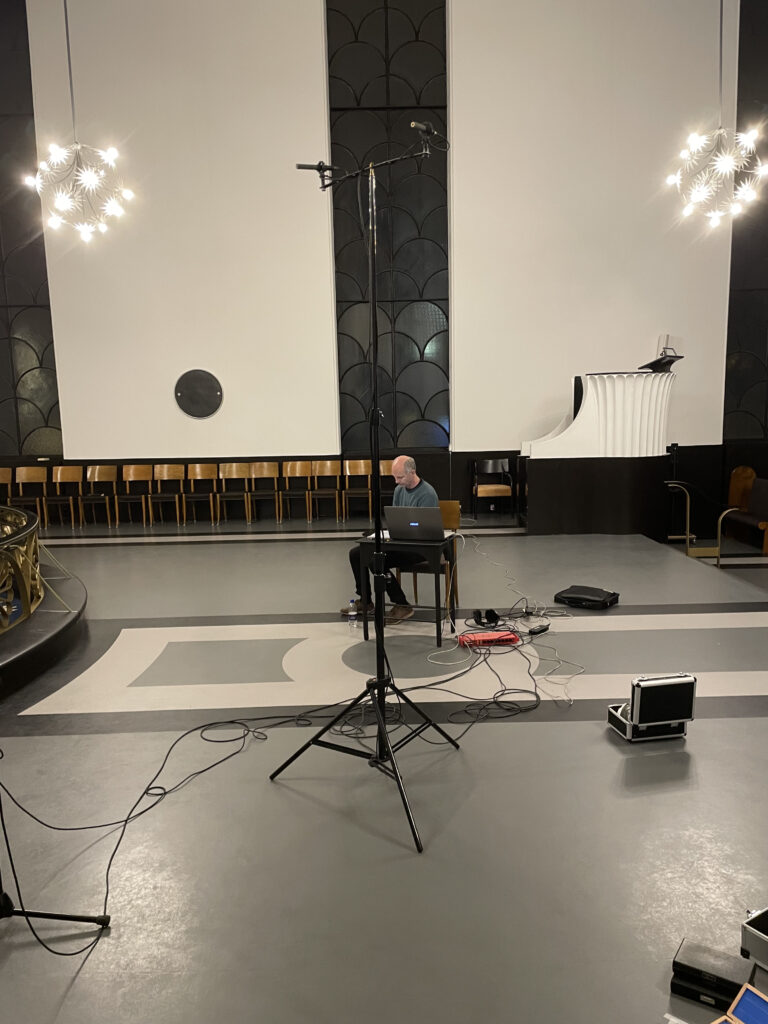 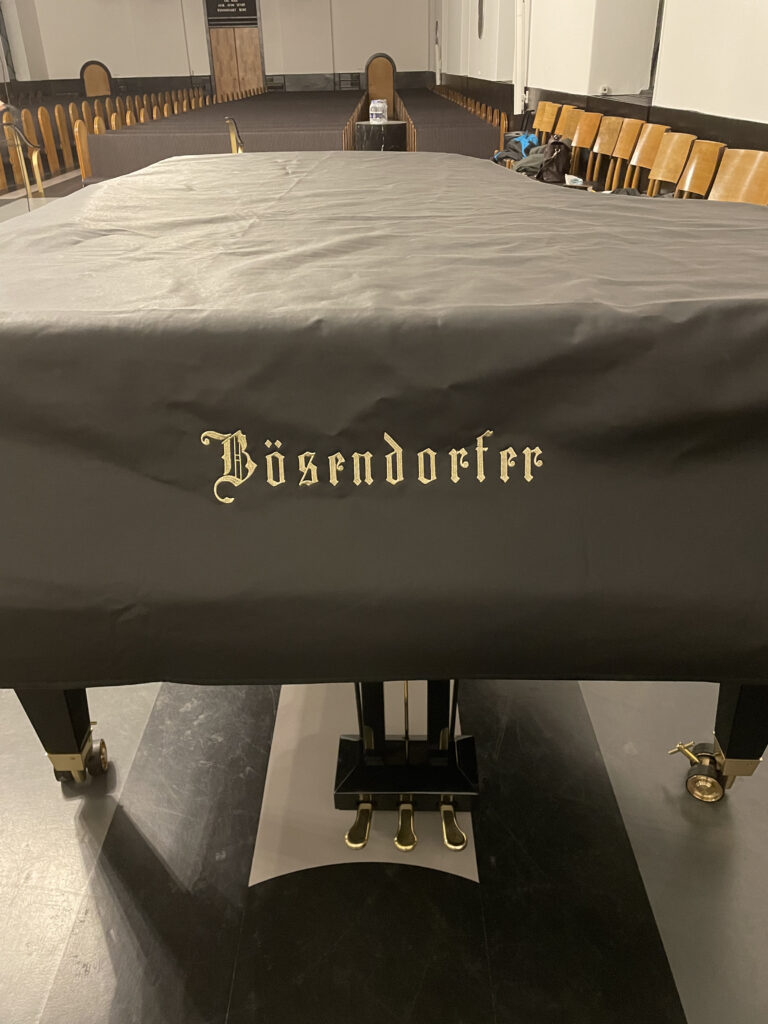 Recording String Quartet no. 1 and sometimes it happens part 1

I started writing String Quartet no. 1 around 2018. And in February 2022, we recorded the piece at Espressivo Studio. 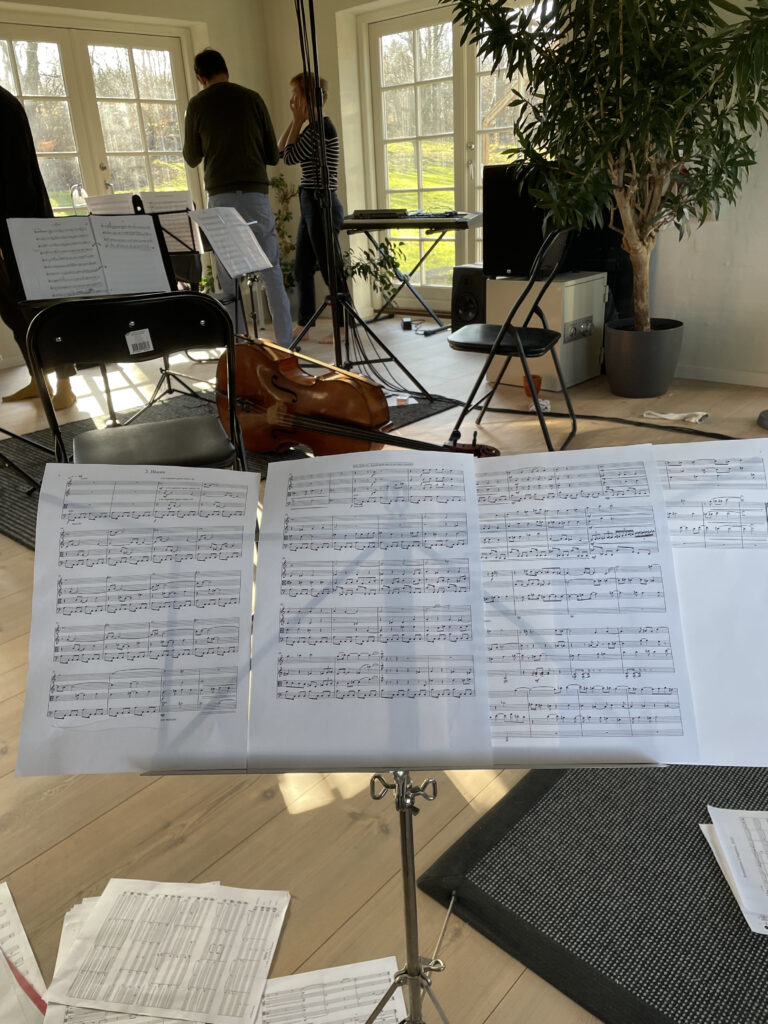 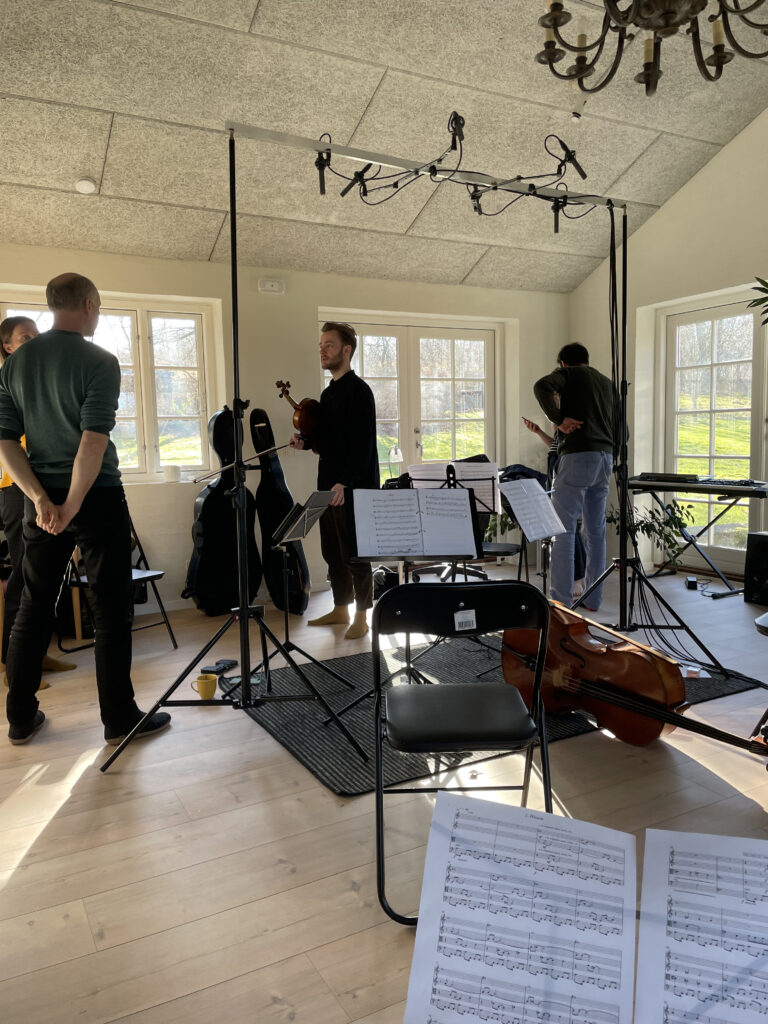 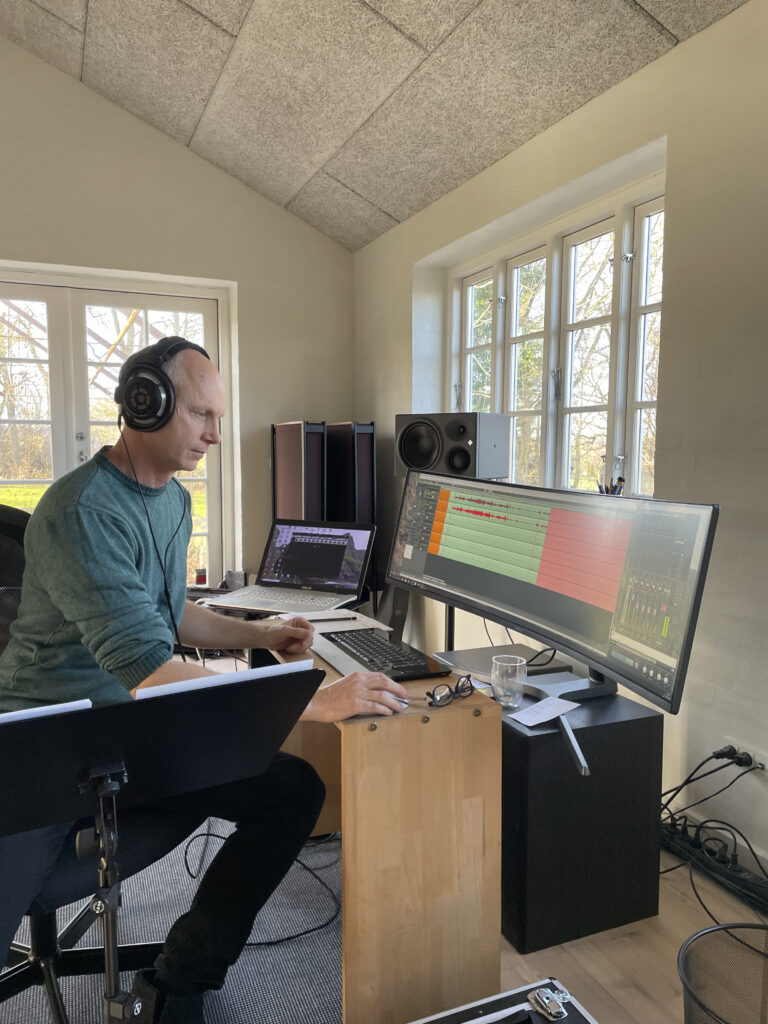 I started writing String Quartet no. 1 around 2018. And in February 2022, we recorded the piece at Espressivo Studio.